Known as the Forest of Mirrors, for the intensity with which the forest is reflected in its waterways, the Pacaya Samiria National Reserve protects one of the most amazing ecosystems on the planet–the Amazonian flood forest. Its vast territory is an aquatic world created by an intricate system of rivers and lagoons, where creatures like the pink dolphin, black cayman alligators, taricaya turtles, and huge flocks of cormorants thrive. Located near the City of Iquitos, Pacaya-Samiria constitutes the heart of the Peruvian jungle.

Location:   In the department of Loreto, in the provinces of Loreto, Requena, Ucayali and Alto Amazonas.

More to See and Experience!

Cocha El Dorado and Yarina: These magnificent lagoon areas are located in the Yanayacu and Samiria rivers basin. They are two of the most beautiful places in the Amazon, ideal for observing wildlife and embarking on an unforgettable adventure in the flooded forest.

Wildlife observation: Pacaya-Samiria is located in one of the most biodiverse regions on the planet. In its forests and rivers there have been more than a thousand species of vertebrates.

Native Communities: The Pacaya Samiria Reserve, by its presence, safeguards and associates with the diverse native communities of the KUKAMA ethnic group. Do not miss the opportunity to know their ancestral customs.

The Pacaya Samiria National Reserve (RNPS) comprises part of the provinces of Loreto,  Requena, Alto Amazonas, and Ucayali of the department of Loreto. RNPS is 8,000 square miles, one of the largest protected areas in Peru. It is located in the Ucamara depression, where there is the confluence of the great Ucayali and Marañon rivers, which form its natural limits. The southwestern part is bounded by a strip of low hills that forms the watershed with the Huallaga River.

Its main objective is to conserve the resources of flora and fauna, as well as the scenic beauty characteristic of the humid tropical forest. The RNPS is home to high biological diversity and an important human population that takes advantage of its natural resources. It includes in its interior the basins of the Pacaya, Samiria and Yanayacu-Pucate rivers. Although mostly it is an alluvial and floodplain lowland plain, it has some low hills in the Pacaya springs.

This topography, added to the annual rising/filling and falling/emptying of the Amazon water areas, creates numerous islands, canals and cochas. Among them stands out the famous El Dorado cocha, in the lower Yanayacu basin, which is the spectacular central tourist destination of the RNPS, as well as a successful example of entrepreneurship in community experiential tourism.

Its territories are breeding centers for several ichthyological/fish species and it has areas with habitats of high fishing productivity. It also protects the area of ​​the largest flooded forest (varzea) in the Amazon. This gigantic wetland motivated its designation as one of the first Convention of Wetlands, called the RAMSAR Convention (a treaty of national action and international cooperation for the conservation of wetlands and their resources) sites in the country, in 1992.

In the RNPS inhabit numerous communities, both native and traditional as well as relatively recent settlers. Its territory offers benefits to thousands of people in the area and in the neighboring cities, as well making this a prime tourism area to experience the Peruvian Amazon.

The presence of more than 1,025 vertebrate species has been reported, representing 27% of the diversity of these species in Peru and 36% of the total registered for the Amazon. It hosts important wildlife species considered as indicators of excellent conservation of its territories. Such species include: the sea cow or manatee (Trichechus inunguis), the pink dolphin (Inia geoffrensis), the gray dolphin (Sotalia fluviatilis), the yellow-faced maquisapa (Ateles beltzebuth), the river wolf (Pteronura brasiliensis), the puma (Puma concolor), the sachavaca (Tapirus terrestris), the otorongo or jaguar (Panthera onca), the huangana (Tayassu pecari), the sajino (Tayassu tajacu) , the red deer (Mazama americana), the maquisapa (Ateles paniscus), the monkey preserve (Alouatta seniculus), and the brown woolly monkey (Lagothrix lagothricha).

The ornithological/bird fauna is made up of 449 species, where bird populations related to aquatic environments flourish, as excellent indicators of the state of conservation of wetlands. Among them are the white heron (Egretta alba), the heron ash (Ardea cocoi), the puma heron (Tigrisoma lineatum), the cushuri (Phalacrocorax brasilianus) and several other species.

Hydrobiological (life processes in water) resources are most important for the RNPS, both for their role in ecological processes and for their economic value, as they are also the basis of food for local people.

Also noteworthy is the presence of large numbers of ornamental fish for export, such as the Zungaro tiger (Tigrinus peruvianus), the Arahuana (Osteoglossum bicirrhosum), the ray (Potamotrygon motoro), the tetra (Hyphessobrycon erythrostigma) and dozens of other species.

Regarding the flora, the RNPS is home to 965 species of wild plants and 59 of cultivated plants. Its value for the protection of biological diversity is greatly justified by the presence of immense extensions of aguajales or aguaje forests (Mauritia flexuosa) and mixed forests of other palm trees.

The RNPS has four information rooms in the surveillance posts of Nauta Caño, Yanayacu, Samiria and Tibilo Pastococha. Additionally, there are 19 surveillance posts and 21 communal surveillance posts. There are also 15 authorized camp areas in the 8 tourist-use areas, three shelters in the Yanayacu-Pucate basin, and two shelters in the community of San Martín de Tipishca. The river cruise circuits of several days within the limits of the reserve are offered by companies that operate in Iquitos and Lima.

ACTIVITIES OF INTEREST
Being such a large area, there are several routes and activities offered. Thus, there are eight permitted areas of tourist use:

The Yanayacu-Pucate basin, from the Twenty January community, near Nauta, to the famous El Dorado car. It is the area where there is the greatest number of shelters and camping areas along the river. The El Dorado lagoon is considered the heart of the RNPS and one of the places with the greatest concentration of fauna.

In the lower and middle basin of the Samiria river, you can visit the Yarina, Fortuna and Ungurahui cochas. In addition, in San Martín de Tipishca, at the beginning of the basin, you can live with the inhabitants of the native Kukama Kukamilla community, who also offer several circuits to explore, both on foot and in canoes.

In the lower basin of Pacaya, where the cochas abound and the forest remains flooded for a large part of the year.

The average annual temperature ranges between 68 ° and 92 ° F. The average annual rainfall falls between 80 and 100 inches. In the RNPS high temperatures can happen at any time of the year, but they are more frequent in the empty/low-water season (July to September). The best season to visit the national reserve is in the high-water cooler times between May and January.

Experience the trip of a lifetime, navigating on water mirrors among the flooded forests of the imposing Peruvian Amazon…the greatest expression of life on Earth.

Do you have any idea why this National Reserve is called the Forest of Mirrors? Because it is due to the magical effect that causes the clear reflection of the jungle and the sky in the dark waters of its two rivers: the Pacaya and the Samiria. You will have the breathtaking feeling of sailing on endless mirrors. Get into this Amazonian paradise adorned with palm trees, floodplains, freshwater lakes, and forested wetlands.  Be amongst the protect endangered species, such as the black maquisapa monkey, the sea or manatee cow, the black and pink bufeo dolphin, the paiche fish (world’s largest freshwater fish, highly appreciated for mild taste), and the river wolf. In addition, on your tour of the National Reserve, you will have the opportunity to admire amd learn about some of the 443 species of birds, 97 of mammals, 55 of amphibians, 259 of fish and 1, 039 plant species in the area. You will even find great diversity of medicinal plants and trees that reach an incredible 165 feet high. In some areas, you can still find rubber trees that retain the marks of the rubber exploitation of about eighty years ago. 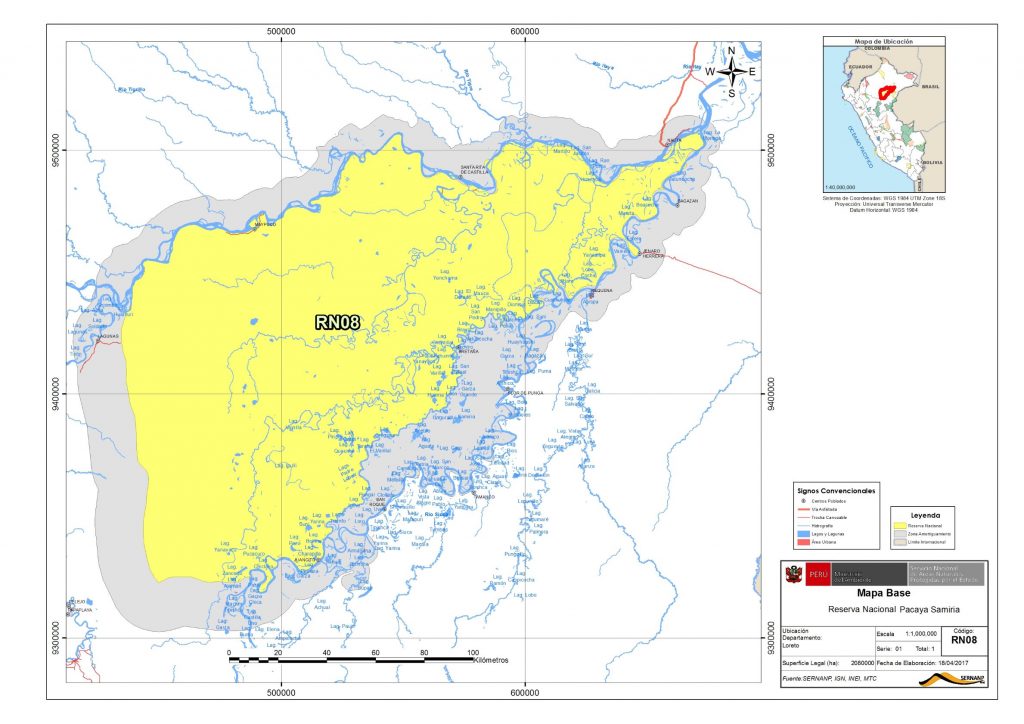